With iOS 12 Apple has started adopting NSSecureCoding across the entire platform. For Core Data this means that the default ValueTransformer, which uses NSCoding to transform a custom data type into a format that can be stored in the persistent store, at some point will change as well.

Because of this, you might have seen the following warning in your project:

This week, let’s have a look at what this warning means and how we can solve it. We’ll start by going over some of the concepts of transformable properties and object serialization.

Out of the box, Core Data supports a variety of data types, for example, integers, booleans, strings, etc. In most cases this is sufficient, but sometimes you want to store data of a different type for example, UIColor. You can do this by creating a Transformable property. When you declare a property as Transformable Core Data converts your custom data type into binary Data when it is saved to the persistent store and converts it back to your custom data type when fetched from the store. It does this through a value transformer.

One limitation of NSCoding is that it is vulnerable to substitution attacks. A substitution attack is when an attacker alters data, for example, stored on disk, with the goal of getting the app into a certain state in which it can be exploited. NSCoding is vulnerable for such an attack because it does not allow you to verify the class type before the object is constructed. At this point, the damage could already have been done.

NSSecureCoding fixes this by allowing you to pass in the type information upfront, so that the archiver can do a class check before unarchiving. You can do this with the unarchivedObject(ofClass:from:) method on NSKeyedUnarchiver. If during unarchiving it encounters a different type of class or one that does not conform to NSSecureCoding it will stop and throw an exception. This will prevent bad things from happening.

Now let’s move back to the warning. In the first sentence, it informs us that our data model contains one or more entities with a transformable property that uses the default value transformer. Either because we did not specify anything in the transformer field of the data model inspector or because it is set to NSKeyedUnarchiveFromDataTransformerName. 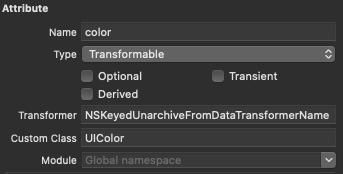 It then tells us that in the future this will default to the NSSecureUnarchiveFromData transformer, which works with NSSecureCoding. And when that happens all transformable properties that do not adopt secure coding will become unreadable.

This means that the first thing we need to do is make sure that the data type of every transformable property in our data model conforms to secure coding. A lot of system types already support secure coding, but if it is a custom type you’ll need to do two things:

The new default value transformer, named NSSecureUnarchiveFromData, out of the box supports all plist types, for example, NSDate and NSString. So If you’re transformable property fits that requirement you can start using the new default transformer as follows:

For non-plist type, for example, UIColor, Core Data won’t be able to figure out which class the unarchiver should check for and will throw an exception. Because Swift doesn’t allow us to catch Objective-c and C++ exceptions this will make our app crash with a fatalError. We can solve this by creating a custom value transformer. Here is an example of a simple implementation:

Here’s what is happening:

The next thing you need to do is make sure Core Data knows that it should use the ColorValueTransformer for your transformable property.

The last step is to make the value transformer available by registering it through the register class function that we created. A good time to do this is right before setting up the persistent container.

Now that you know how all of this works you can go ahead and fix the warnings in your project. While you do that, it is a good idea to update any of your existing value transformers so that they also use NSSecureCoding. Doing this will make your app more secure.